Smoke's Poutinerie has been crafting poutine for over a decade. The Canadian fast food chain operates roughly 50 restaurants across North America — and today, they're sharing their secret to poutine.

Most Canadians know the basic recipe for our national dish: crispy fries, rich, fragrant gravy and a healthy (or not-so-healthy) sprinkling of white cheese curds.

But what's the secret to making poutine so delicious that it knocks people's socks off?

Well, it all starts with the length of the potato, according to Ryan Smolkin, founder of Smoke's Poutinerie.

Smolkin explains that Smoke's Poutinerie custom seeds their own premium yellow-flesh potato, leaving the skin on the fries for extra protein and flavour.

And when it comes to cutting it, length-wise is the way to go.

"Even the size of the potato is restricted," Smolkin tells Freshdaily. "We're really picky. We go between a seven-ounce and a sixteen-ounce potato."

That stops the poutine from having those burned, flaky little spuds that often ruin a good dish.

Smolkin says that when it comes to the type of potato, though, anything goes: russet, white, red. You name it; the world is your oyster (or rather, your potato).

And Smolkin is one of the dissenters.

"The majority of people go with the russets in the industry," he says. "I get called on that since day one, eleven years ago. Everybody uses russets. And it's like, why the hell would I use russets if everybody else is using russets?"

His advice for the home chef? Pick the potato that you like.

But a great poutine isn't all about the potato; the gravy and cheese curds are important, too.

Smolkin explains that Smoke's Poutinerie uses the authentic Québécois chicken-based stock for most of their gravy, throwing in rosemary and a top-secret blend of spices.

And the cheese curd should go on before the piping-hot sauce.

"That's a good way to test the freshness of your cheese curd. If it's melting..." Smolkin pauses for a moment. "That would be the biggest mistake."

Melting means that the cheese isn't fresh. Instead, the home chef should look for a squeaky cheese curd.

"I always say for ours, it's like two balloons making out," Smolkin adds. 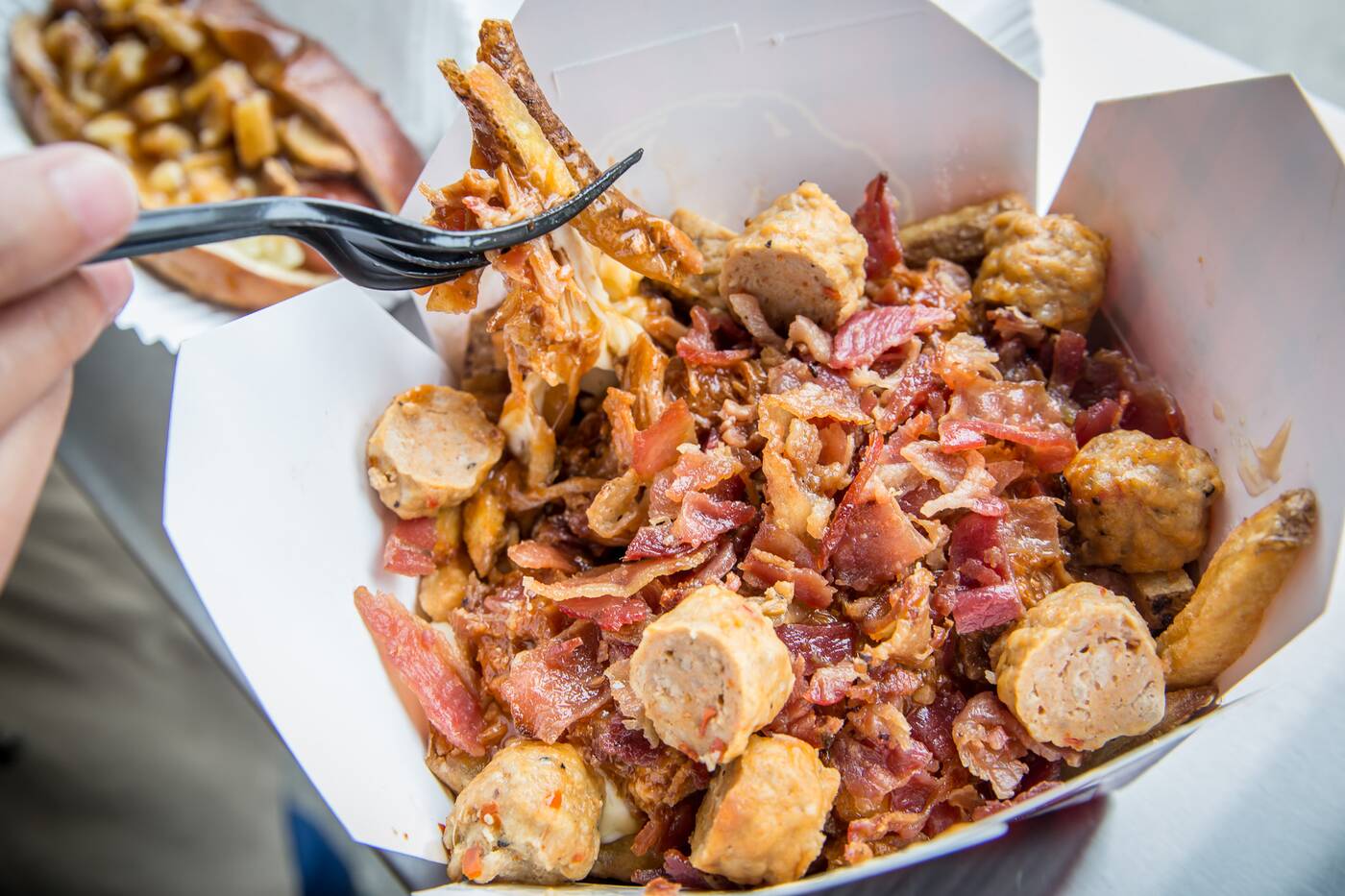 A version of Smoke's poutine loaded with bacon and sausage. Photo by Jesse Milns.

Smoke's Poutinerie sells dozens of unique flavour combinations, and Smolkin is no poutine purist; he encourages home chefs to get inventive with toppings in the kitchen.

"Load it with everything you can think of," he says. "Make it a meal. Have a good time."

Smolkin mentions everything from fancy ingredients such as foie gras, steak and lobster to things that the average Canadian would have in their fridge: mushrooms, onions, peas.

He also specifically recommends bacon and maple syrup together ("If you're in Canada, you gotta try that puppy.").